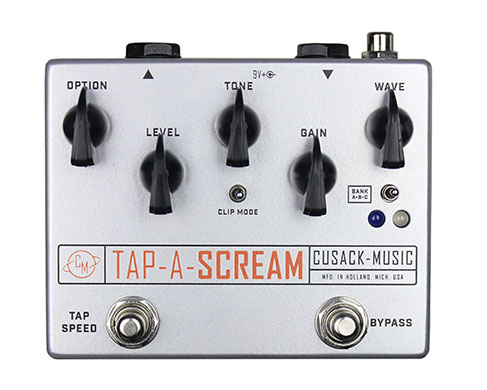 What started as a joke became the world’s first and only tap tempo overdrive. The Cusack Effects Tap-A-Scream is our Screamer overdrive pedal with our Tap Tempo engine. But what is there to tap tempo on an overdrive, you ask? The gain of course. Best described sonically as an overdriven tremelo, the Tap-A-Scream has all the same features of the Screamer, while the 24 waveforms modulate the gain. The Random wave (bank C, wave 8) is actually no modulation, allowing the TAS to be used like a normal Screamer.

Like the rest of the Tap-A series, the Fade-in, Brake Speed, Tap Divide and Tempo are all programmable for each waveform independently. Once you have the settings for a given waveform simply push BOTH footswitches as the same time to save those settings.

An external RCA jack on the back of the pedal can be used as either a Tap IN, or OUT. Connect a cable from the RCA jack to another pedal’s Tap input to use the internal switch on the Tap-A-Scream to tap both at the same time. You could also set the tempo remotely by plugging the PBT Tap Out or Remote Tap Switch into this RCA jack.